This is the address I gave at my dad’s funeral at Burnley Crematorium on Friday February 24 2012.
Dad had said he was worried about being forgotten, that people in later years might not know he had been around.
I’m publishing this so that people do know; and every time someone reads it, dad will live on. 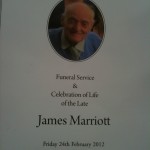 Today shouldn’t be remembered as one of the saddest of days.

Also a husband, brother and son. And Burnley fan.

But we’re also here to celebrate a life, and what a long one it was. 95 years. Amazing.

I hope he had everything he wished for. Other than maybe Burnley winning the FA Cup in his lifetime.

On Friday February 3, 11 days before dad died, I wrote myself a note. It said “I am very proud of my dad.” I also wrote: “When God gave out balls he gave dad an extra pair.”

Dad had gone into hospital. Now that was one of my saddest days. It was heartbreaking to see him in pain. We were told it was likely dad had hours to live.

But dad had other ideas. He had a 95th birthday to get to. He hung on to mine and my sister Sue’s hand with such an iron grip; as if he wanted us both to pull him up and out of bed. We gently chuckled and told him to save his strength.

But dad said: “This is no laughing matter.” If he could have defiantly pointed his finger he would have.

He wasn’t giving up, not just then. He was fighting, as he had done all his life, from the day he was born.

Dad – Jim- was born at Burnley Victoria Hospital in 1917 and was two months premature. He was delivered by Dr Macgregor Sinclair and  he was given the middle name MacGregor in tribute to the doctor. His mother, my grandma, managed to keep him alive by feeding him through a fountain pen tube and keeping him warm in a drawer by the fire.

This was dad’s start in life. You can see why he wasn’t going to give in easily after that defiant beginning.

Dad went to Coal Clough Lane infant school but when he was nine he became ill and was off school for over a year.

He was taught at home and encouraged to read a lot, which was the start of his thirst for knowledge. He moved to Sheffield in 1927 where he was allowed to take his 11 plus at 12 because he had missed so much schooling. He enjoyed french, mathematics and   English grammar. Many a newspaper reporter – usually from  the Daily Mirror – has been phoned up over the years and criticised for their poor grammar!!

Seventy odd years later that thirst for knowledge was still being quenched. After retiring he passed exams in German at Burnley college. At the age of 84 he learnt computing and up to a year ago was still to be found tapping away on his laptop.

Dad had a stock of stories he’d save up for new blood, usually at weddings, family meals, or funerals.

The time when in the RAF he’d saved an entire bomber squadron from flying into barrage balloons over Sheffield.

The day when he was in a park in Sheffield and a Polish pilot spotted dad’s RAF uniform and landed his plane in the park to ask directions.

His pubs. He loved HIS pubs, the ones he’d managed in his very long career working in breweries.

Cars. Driving. He was an advanced motorist even though he made mum have kittens every time they drove anywhere.

Driving the Monte Carlo rally with his great friend Maurice: And the holiday to Germany he shared with mum, Maurice and Joy.

Raq, his beloved labrador. He loved my little dog Millie. “Now then, now then,” he’d say as she licked his face all over. He gave her half his chips even though I asked him not to.

The day he became pool champion in my old local, the Lion of Vienna in Bolton.

And of course, football. The first time he went to watch Burnley he was about four and thought he was going to the circus. At half-time he asked when the clowns were coming on. A chap in front heard him and said: Son. They’ve already been on.

He travelled everywhere to watch Burnley. While working and living in the North East he scouted for football talent for his friend and burnley football club hero Harry Potts. He bought me a season ticket when I was 13. I don’t know why he decided to do that, but it defined our relationship ever afterwards.

In dad’s later years it was tragic that he lost both his wife and his leg in the space of 18 months. But dad carried on regardless.

That was his way. Always matter of fact. Doing what needed to be done.

Dad’s Saturday afternoon routine was to watch snooker; tune in to Radio Lancashire for the match; tap on his laptop and update his Excel document on Burnley’s fixtures and goal difference. “Because Burnley Football Club know I’m doing it and will want it you see.”

He had a constant, constant conviction that he could drive if someone let him; that he would still be able to give any Burnley centre half a good run for their money even in his wheelchair.

He could also be quite grumpy.

Then about a year ago dad started getting more and more tired. He was never sentimental, but he started asking for a hug when people left. “Leave the door open,” he’d say. “I’ll come and wave you off . You never know, it might be the last time.”

So there we were a couple of weeks ago at the hospital. Dad came though his crisis, but the prognosis wasn’t good. The last time I saw him we chatted constantly. A lovely, proper chat, about football, school, his family. He said people had visited him, he’d known they’d been there but hadn’t always had the strength to say anything.

He told me he’d been a good runner like his son but “not now, because of this” he said as he tapped his missing leg. He was convinced it was the leg that stopped him running, not the fact that he was nearly 95.

Then dad said, give me a kiss, off you go now, and leave the door open on your way out.

So I did and when I looked round, there he was, pulling himself up, with the biggest smile, waving me off.

I am very proud of my determined dad. God bless.

My cousin Peter also gave an address at the funeral and we felt it was fitting that it should appear here too, as special memories of a special uncle.
Jim was uncle to myself and brothers Paul and Tony. He was also great uncle to my children Steph and Ben and Tony’s son James.He was the only uncle we have ever had (as we never knew his brother Bob) and he was very special.Uncle Jim and our dad Wilf were very close brothers and Jim was similarly a very close brother-in-law to our mum Marna, who’s with us today.
I always felt that he became an adopted grandad when my
children came along. They never knew their real Grandad Marriott; and I think because of his closeness to our dad,  Uncle Jim considered himself more than just a great uncle.
I remember when growing up that Jim and his immediate family were avid Burnley fans, yet my Dad and us three lads were massive Sheffield Wednesday fans.We all supported our own teams and were keen to see them win but we have always looked for Burnley’s result in the hope they had done well and Uncle Jim similarly followed Wednesday’s fortunes. We often discussed the ups and downs of both clubs at length.A game I recall attending was at White Hart Lane one evening
in 1983 with Uncle Jim, David and Jane amongst others. Burnley
beat Spurs 4-1 in an historic   victory. I was certainly an
adopted claret & blue that night.Jane reminded me this week that after the match we went to a
pub near where Dave lived in Hertfordshire and Jim as ever was
keen to discuss the finer points of the game with as many people
as possible, but it seemed that almost everyone he spoke to in the pub were Spurs fans so he had a great time talking to them and enjoying Burnley’s night of success.
Though I don’t think Uncle Jim was ever one to gloat, he was just totally enthusiastic about football and its analysis.My brother Tony recalls Uncle Jim watching him play football in the 70s. After the match he would be told what improvements he could make to his game. Always constructive advice and Tony acknowledged Jim’s understanding of the game from his own playing days.Uncle Jim would often talk to me about his time playing for the RAF, he had obviously been an excellent player.Many of us will remember playing snooker and sometimes billiards with Uncle Jim. He was a good player and again eager to teach you a few finer skills of the games.Tony recalls occasions when Uncle Jim would visit us in Sheffield.
We lived on a steep hill. Most routes from our house back to the
main road entailed an easy uphill drive. A less easy exit route was down a winding country lane. Guess which one Uncle Jim would often choose. It was an unmissable challenge for Jim the ex rally driver.His target seemed to be to see how many blind bends he
could negotiate at excessive speed. He always managed to get
down unscathed, though as passengers we were probably a little apprehensive about the outcome.
Paul similarly recalls being driven by Uncle Jim over the “Tops”
on the country roads between Sheffield and Burnley. Always
guaranteeing a white knuckle ride to match any roller coaster.Uncle Jim always had to be doing something. I remember often
visiting Uncle Jim and Auntie Sally to be confronted with one or two cars in various states of disarray in the garage and on the drive.
Uncle Jim would appear to say hello up to his elbows in grease
or masked up with a spray gun in his hand. I think it drove Auntie Sally bonkers but he was never happier and always keen to talk you through the latest restoration project.More recently Jim attended college, becoming probably their
oldest-ever student. He wanted to get up to speed with computers and learnt how to use e-mail and spreadsheets.My son Ben recalls how Uncle Jim would show off his recently
acquired skills using them to produce a database of Burnley
Football Club including every result, goal scorers, and probably
even what the weather was like. . . . .
He was amazing, he just never stopped wanting to learn.Many of us will also recall Jim’s liking for other types of technology, not least recording media. He seemed to have more video recorders and tape decks than Phillips. I reckon he was one of the  few who still used the old Betamax tapes.I could go on and on and on ….. there are so many more happy
memories I could share with you but they can wait until later today when I hope we can all share lots more memories. Whatever the memories they are treasured and will last forever.Uncle Jim was the head of our family, he was unique, a true one-off and loved by us all.I think Ben and Steph’s Mum Kay summed Uncle Jim up when on hearing of his passing she told me how sorry she was and that he was a lovely man.Uncle Jim, you certainly were a lovely man.Rest in Peace. God Bless.